Daniel Fetecua-Soto is originally from Bogotà, Colombia. He earned his BFA from Folkwang-Hochschule in Germany, and since 2006 he has been a member of the Limón Dance Company. He has appeared as a guest artist in Pina Bausch’s acclaimed and unforgettable Rite of Spring and Tannhäuser. Daniel has also worked with La Fura Dels Baus, Kuo Chu Wu, and has been an award-winning competitor in the European Salsa Championship.

He is founder and artistic director of Pajarillo Pinta’o, a dance company that combines Colombian Folklore and modern dance. The company is dually based in both New York and Germany, yielding valuable cultural interchange. Daniel aspires to share the richness of Colombian Folklore with the world by providing opportunities for people to experience it through the music and the dances.

Daniel sat down to share his teacher’s journey with fans of R.Evolución Latina.

What was the first dance performance you saw and how did it impact you?

Actually, it wasn’t a show. It was a class I took at the Grupo de Danza Folclorica of the National University of Bogotá, after wishing to dance for many years. I had never heard the word “plié”or any of the French vocabulary for dance. It was a modern ballet class based in Duncan technique with maestros Patricia Martinez and Edgar Sandino. Maestro Jacinto Jaramillo brought Duncan technique to Colombia and created El Ballet Cordillera! Before that, Vladimir Rodriguez made my stiff body stretch and roll on the floor, and dance some tortellino and Joropo in his “Curso Libre” in contemporary dance. Later he told me there was a place were I could get a degree in dance, then I took off… Colombia, Germany, and US—gracias, Maestros!

Speaking to the theme of the festival, how has your life been made bountiful through dance?

Dance has been so generous to me, it has helped make me a better person. It has taken me around the world and I have encountered great countries and cultures because of it. Dance has given me the opportunity to give and receive, to share and feel, to dance… Dance is Bountiful!

Where do you look to find inspiration?

Everywhere, every day, with every person. We are all the same AND different, so there is always something to take inspiration from: a word on a wall, a bird flying or singing, a reaction from someone on the street. Sometimes there is an idea that comes from nowhere and it is fantastic to make it come alive. I choreograph because there is a voice to be heard, an unknown that can be known, new creations and new worlds to be discovered for me and the audience.

How do you overcome choreographer’s block when making a dance?

Every piece starts from a different spot. Sometimes the idea is very clear, sometimes it is not. But I write down whatever is there and start to build in my mind how it would look, how I can make it happen. Then in the process with the dancers things begin to appear, to happen, to be discovered in the process. Sometimes it is just so clear that the dance evolves very quickly. 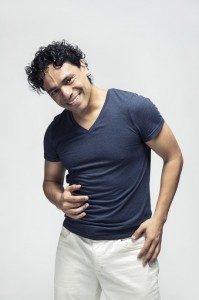 What do you hope to communicate to audiences viewing your piece?

Just the fact that there is an audience to see the piece is already a “win”. Hopefully my piece will represent my idea or wish but there is always room for the viewer to see with their own eyes.

What advice would you give to dancers hoping to perform or choreograph professionally?

Go for it! We learn on the journey and each of us has different paths to get there, but it is possible. There is a Colombian saying: “La experiencia hace al maestro.” Work, work, work.
● ● ●

Daniel is currently a guest choreographer and board member for ID Studio Theater. See his choreography live at BOUNTIFUL: A Teacher’s Journey. 1-Minute Pieces in English or in Spanish
Limited Space; Auditors Welcome
Take your acting to the next level with Rosalba Rolón! She has worked as a director across the country – most recently Off-Broadway with Harlem Hellfighters on a Latin Beat; she has been a part of the BWS for over a decade; and now she’s with us again to work on your contemporary monologue in English OR Spanish! Limited Space! Need a SAFE space to try out a new song, practice old material, try a new approach? Well HERE IS YOUR CHANCE! You choose whatever you want to sing before your peers, and the amazing Justin Ramos is back to give feedback and guidance. Maybe you’ve been a part of the BWS+ before; maybe this is your first time; but come make YOUR VOICE be heard. Dare to go beyond!

Please bring physical sheet music for your accompanist/teacher to play from, mark up, offer a cut suggestion, etc. 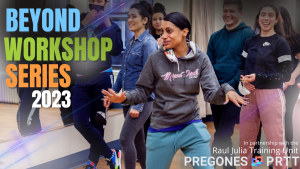 Our first BWS+ Class after the Beyond Workshop Series 2023 completes! Join us for our next movement-based BWS+ offering with one of the most talked about, up-and-coming choreographers in the business: Rickey Tripp! Like Rosalba, Rickey has been part of our Beyond Workshop Series for over a decade, and we know this workshop will continue to challenge us to dare to go beyond! All Levels Welcome!