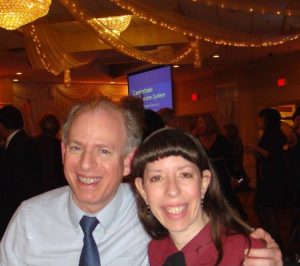 In 2015 we made a trip to Chicago from New Jersey for a few hours that would change not just our lives, but so many others lives. We made a last minute decision to get a flight at 10:30pm at night on a Friday in June, 2015 to see the 2pm show of On Your Feet, The Story of Gloria and Emilio Estefan in Chicago on Saturday. We always wanted to see a show before it came to Broadway.

We always enjoy Gloria Estefan’s music so we figured why not. Funny thing was that Alan broke one of his toes after making all the plans that night, but even with his broken toe we still went to Chicago. Alan even did the Conga with the cast at the end of act one with his broken toe. After the show we went to the stage door because we wanted to tell Ana Villafañe (who played Gloria) and Josh Segarra (who played Emilio) how wonderful the entire performance was. We could not get over how really down to earth and nice both Ana and Josh were. They were both surprised to know that we came in from New Jersey to Chicago just for the 2pm show and were getting ready to grab a quick bite to eat and head back to the airport to go home. Ana asked if we would see the show again in NYC and of course we said we would. 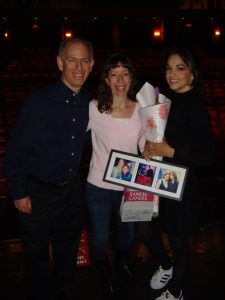 Four months passed and it is now mid October, 2015 and as we were walking on 45th street in NYC, we saw Ana Villafañe walking towards the theater. We called out to her and to our surprise she remembered us from Chicago. Her kindness made me curious as to learn more about Ana. I then took to Facebook and messaged Ana to thank her for being so kind in remembering us and letting her know how much talent she has. I told Alan that Ana was fundraising for an organization called R.Evolución Latina (RL) and was asking for $1,000 dollars.

I asked Alan to look into this organization and see what it was all about. Alan did the research and was very impressed with all of the programs that they offered. We agreed that we wanted to give the $1,000 dollars so that Ana could reach her goal. I’m a cardiac nurse and had to be on call the day of RL’s Dance a Thon 2015. I told Alan to go to the Dance-A-Thon because she said one of us had to be there and Alan agreed with her. 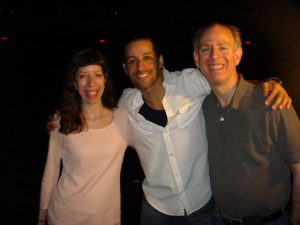 It was the first time Alan had met Denisse Ambert who is Luis Salgado’s wife, his baby son Hikari and all the amazing volunteers.  Alan remembers sitting with young children coloring at a table watching everyone dancing and having so much fun. He did not know that Ana Villafañe was going to tap him on the shoulder and take him for photos along with Luis and the directors of RL. He left that day feeling that this organization and these programs they raise money for are life changing and so needed for the Latin community.

Few weeks later Alan remembers seeing Denisse Ambert with her son Hikari. Alan went up to Denisse and said hello and thanked her for a wonderful time the week before at the Dance-A-Thon and introduced me to her. We asked Denisse if there was anything else we could do for RL and she took our number to say that RL Choreographers Festival was happening in April of 2016 and she was looking for supporters. We met Denisse for coffee and it was an easy decision for us to make and we completely supported the Choreographers Festival.

Since 2016 we have been supporting R.Evolución Latina’s mission, by attending monthly meetings, events, and programs. We feel that to support RL we had to also become part of the family of RL. We made such amazing friendships these past few years and have seen how our support directly has changed so many lives. 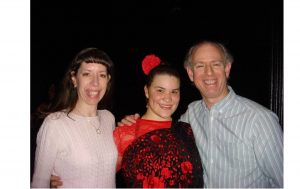 Our support has given so much to a beautiful community. Both of us have grown as humans and we have seen artists who took RL’s programs grow as well. We have personally seen the opportunities that RL has created through their educational programs and they are unlike any other we have seen. The passion, hard work, heart, love, and determination that the RL team puts into each and every individual that goes through their programs is remarkable. We have seen individuals leave the programs with such inspiration and motivation for life.  We have witnessed many people who are part of RL create spectacular art all over the world. Some have joined national tours, some are on Broadway, some are doing local community projects and educations of the arts, and some even win Tony Awards. RL truly transforms humans who go through their programs. We not only believe in just donating money to RL, but being there as supporters to let everyone know that it takes more than just money to support. It takes money, time, hard work, and getting the message out to as many people and to as many communities as possible. 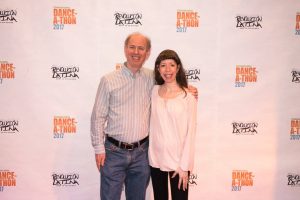 We feel that as much as we are daring to go beyond that we want to dare the directors of RL, the volunteers, the students, and of course the artists who are already on stages and Broadway stages to go beyond. It is true that RL offers many different opportunities for free artistic workshops and true life performances, but they also offer life training and helps bring a community together to make the world a better place. They teach that together possibilities are endless. We have always believed this and is one of the reasons RL is the perfect fit for our support.

With all our love, 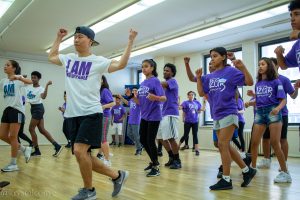