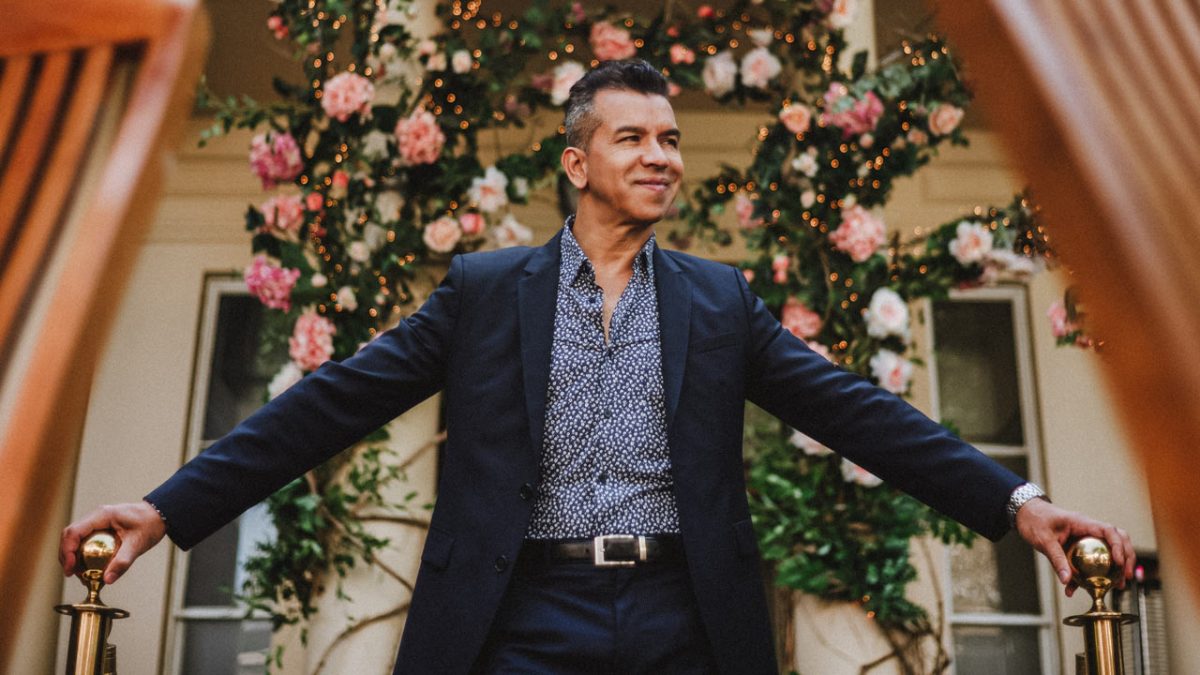 Sergio Trujillo: The Man Behind the TONY 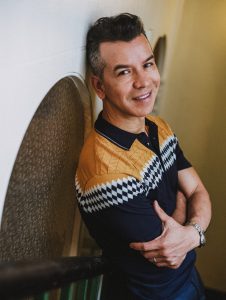 Sergio Trujillo is one of the most accomplished choreographers of his generation. Over the past decade, his name has been in lights on the marquee of one and at times, making history, with four Broadway shows running simultaneously. Nominee of several Drama Desk awards, winner of the 2015 Oliver award for Memphis and most recently the winner of the 2019 TONY award for best choreographer. I met Sergio in 2006,  in LaJolla, CA and worked with him on Dr. Zhivago and The Wiz,  two of the largest musicals I had done in my career thus far. Sergio was precise, hardworking and asked the same of everyone in the room. I loved it, I was inspired by his artistry, attention to detail and work ethic, these 2 shows definitely led to the future of my career with Broadway musicals and beyond. Fast forward, 9 years later I was working at On Your Feet, choreographed by Sergio and in 2016 had the honor of traveling to Bogota, Colombia to be part of a very important show, Arrabal, that he created and directed where I learned so much more about the heart of this man and the stories he is telling at this point in his career.

Born in Cali Colombia, Trujillo always knew dance was his passion as it was a huge part of his home life with his family. “Music and dance are part of our culture, our traditions. Growing up we used music and dance to find and express our joy and happiness.” The passion grew and as a young boy he took the bus by himself to find training at the closest dance school

We sat down with Sergio in his home on the day his TONY award arrived, surrounded by the sounds of a toddler’s toys mooing, and whistling and his mother’s quiet attentiveness to dishes in the kitchen and her 1-year-old grandson. Throughout the interview, he frequently stops to check on his mother, and just watch her, letting unhindered words of love and admiration for her slip in as he speaks about home, culture, dance, work, and the present.

Although not planned we were lucky to witness Sergio’s reflection on winning the TONY award and his gratitude for his background, his roots and his family. Knowing fully that he did not win this award alone.

And the Tony Goes to…
You know, I’m a looking forward kind of guy, I never look back. But now in this moment, this award has allowed me to look back. When I got nominated I thought about the last 30 years of my life because really that’s how long I’ve been here in New York. Winning has opened me to look back even further than that and just think about my family. About all of my relatives specifically one uncle who made the journey to Canada in 1969 and actually was the one that began the journey for all of us. What’s important about something like this is that it allows my family to celebrate our history of the past and that the efforts of my entire family have not been in vain.

Beyond the support of my family, I have been part of numerous creative teams that have helped me on my journey. I’ve had many mentors over the course of my career. Over 500 to 700 dancers who have all been incredibly devoted to my work.  I’ve had so much love and so much support from my friends my family my peers and you know that this moment doesn’t happen alone.

“You don’t just win by yourself.”

Your performance career started at the age of 19 and you spent 10 years performing on the Broadway stage in numerous shows. What had the greatest impact?
I would have to say the two shows that bookend my performance career, Jerome Robbin’s Broadway which started my career and then my final show FOSSE. They both represent a very special point in my life, so there is not only one.

Choreographer of (too many to count) musicals on Broadway, off-Broadway, tours and Broadway tryouts,you have created and developed movement using the styles from the 1960’s footwork of Jersey Boys, to the intricate and now explosive moves of Motown in Ain’t Too Proud to the culturally rich Latin styles in On Your Feet. Asking dancers to execute your choreography with the same precision and commitment you ask of yourself. Which fulfilled you the most…
Oh my God… that is a tough question. The more I do the more I become one with what I create. The more I allow myself to express my soul fully. Each show is it’s own unique experience, no matter what I have done I always approach it with the mindset that this is the first and only time I am going to be up to bat. Every show represents a moment in my life and they’re all special in that way. It’s hard. It’s like having 12 children and being asked to pick your favorite. 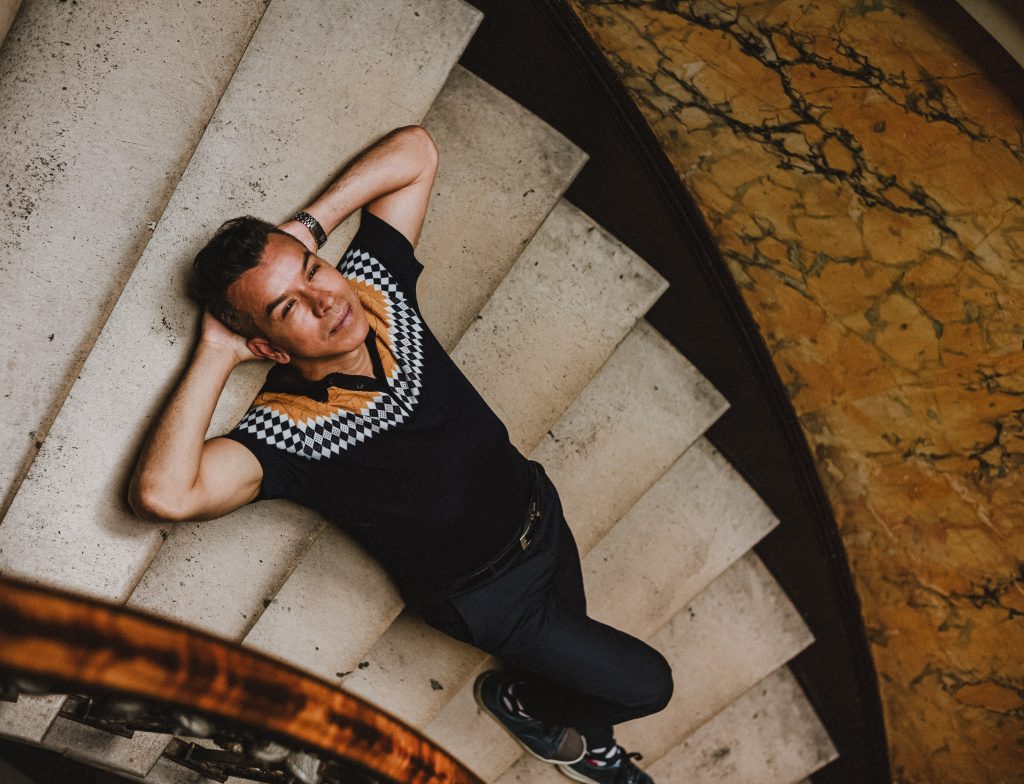 What is home to you?
(Baaaahhh is heard from Lucas’ Playpen) This (laughing) I think home to me is this, being a dad, my family. I can also be very much at home in a theatre creating in tech rehearsals or I can be very much at home in a rehearsal room. I think home is not where the heart is but home is where you really are able to be at peace with who you are and the purpose of what you are about.

Being a father…
Balance. It has brought me so much balance. It has allowed me to do the exact thing that I thought it would do, it has opened my eyes to experience the moment… a big part of being a director and choreographer in the creation of what we do is to be able to keep our eyes open, keep a light in our eyes. Having Lucas has allowed me to look at the world from a new point of view from a new lens, from a pressure lens. To be present, really be in and enjoy the moments that I have in this life.

What is the oldest thing that you own and its significance?
I have my diaries. I actually have one I was just looking at upstairs. Now and then I look at different pages just to remind myself. You know it’s not the oldest thing, but it’s the most significant thing that I’ve recently found again. It reminds me of the journey that I’ve been on. As a  young idealistic dancer with big dreams, aspirations and goals like so many of us have… to look back and be able to say I fulfilled those dreams has been really incredible. Rewarding.

A lesson learned that you have never let go of…
Perseverance. I have never stopped from persevering from maintaining the tenacity to achieve, but it has not solely been about winning the Tony. It’s about making sure that I maximize my existence, to maximize what my purpose is. Now, right now and that is to bring joy through my work through my dance. You know, if somebody comes to the theatre and they watch my choreography I hope that I’ve been able to uplift them and bring happiness to them.

OFF THE RED CARPET

The color of your laughter is…
Blue. Blue is a real it’s a real calming color. To me it’s a reassuring color. Actually, I’m selfish with my laughter, I only really laugh when I really mean it. Jack, my husband says I have no sense of humor. But when it comes I smile it in blue.

Your favorite book…
One Hundred Years of Solitude.

One number that you have choreographed that you would want to perform now.
Again each show is special to me but if I were to do one number it would be Ran-kan-kan from Mambo Kings in Luis Salgado’s track.

Guilty Pleasure
Fried chicken. And my mom’s food. My mom makes incredible… (He trails off, his mother watching him watch her as he speaks asks “que?” Sergio explains to her in Spanish what we are talking about and repeats to her that her cooking is incredible. Adjusting himself back to the questions he repeats) She is incredible.

Tell us, your mom is…
SHE is my Hero! Again, in this moment right now that I’m living she’s teaching me, and she’s taught me so much and continues to teach me so much about how to endure. Her resilience. She’s disciplined, she’s always been disciplined. She works out. She’s my hero.

I was lucky that my parents let me be. I was the most carefree child and had an amazing childhood in Colombia, I raised by a family that really allowed me to BE,  that is what I wish for him too. And to be bilingual. (Noticing his mom moving in the kitchen, he asks her if she needs anything and says quietly to me) She is amazing… she’s 86, you know?

Next up…
I am just getting ready for what is next. I just finished a period of five shows in 6 years… On Your Feet, A Bronx Tale, Summer, Ain’t Too Proud and Paramour. Now I begin to sort of sow the seeds for the next five or six years, taking a leap of faith to direct and choreograph. Finding projects is going to take a little bit more time because I want to do things that I want to do.

Sergio made it clear to all during his acceptance speech at the TONY Awards that “Dreams do come True”. Sergio visited R.Evolución Latina’s camp and it was the most inspiring thing seeing him share his story of hard work and dedication with the campers and letting them hold his TONY. At that moment in a NYC studio, where I am sure he has held auditions and rehearsals, he transformed into the kid from Cali, Colombia who took the bus by himself to the nearest Dance school.